We Can Do Anything (Limited Edition Transparent Green Vinyl)

Violent Femmes' ninth studio album - and first full-length collection in more than 15 years - 'We Can Do Anything' is among the most provocative and playful in the legendary trio's remarkable canon!

Produced by Jeff Hamilton – a longtime member of the Horns of Dilemma, Violent Femmes' ever-evolving cabal of multi-instrumentalist backing musicians – and mixed by the legendary John Agnello (Sonic Youth, Kurt Vile, Dinosaur, Jr.), 'We Can Do Anything' was recorded in studios in Brooklyn, Nashville, Los Angeles, Milwaukee and Denver, while on tour during the summer of 2015. The album's cover image was drawn by Barenaked Ladies' Kevin Hearn, who also contributed accordion, guitar, keyboards, and backing vocals on several recordings. Rounding out the live touring band and members of The Horns of Dilemma are John Sparrow and Blaise Garza who has been playing with the band since he was 14 years old.

Gano gathered the album's material by diving headlong into his own voluminous archives, listening to ancient cassette demos and leafing through old journals in search of suitable songs. Among his finds were such new classics as the murderous "Big Car" and the fractured fairy tale, "I Could Be Anything," Of the album's more recent songs, "Foothills" and "Holy Ghost" were both penned with the team of Sam Hollander and Dave Katz (Train, Joe Cocker), while "Issues" – co-written by Gano with Hollander and Better Than Ezra's Kevin Griffin (Christina Perri, Howie Day) – stands out as vintage Violent Femmes, as lyrically cutting as it is musically kinetic.

Penned by Gano's big sister, gifted folk singer/songwriter/artist Cynthia Gayneau, "What You Really Mean," the album's sole cover, might as well be an original composition, hewing remarkably close to the frontman's own sonic sensibility and lyrical heart. Colored by explosive arrangements that veer on a dime from hard charging stomp to intimate melancholy, 'We Can Do Anything' is Violent Femmes at their very finest – joyous, exciting, and eternal. 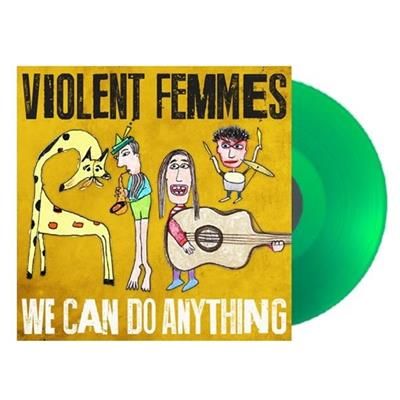